In the fall of 2013 the CSRC decided to take a break - at least for the academic year - to re-energize and seek new resources. The following article about the temporary disbanding of the CSRC was published in The Leveller. 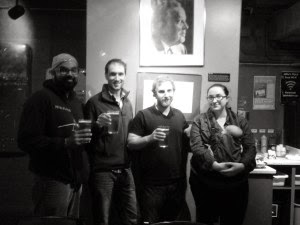 Friends, Ravens, activists! Lend me your eyes. I come to praise the Critical Social Research Collaborative, not to bury it!
It is with a heavy heart that I must report that as of fall 2013, the infamous Critical Social Research Collaborative (CSRC) has formally disbanded. It was not too long ago, between the harvests of 2008 and 2009, that this ambitious group took shape under the spectre of a Marxist reading group. The founding vanguard included Gulden Ozcan, Aaron Henry, Ryan Katz-Rosene, Priscillia Lefebvre, and Carlo Fanelli. The group was largely affiliated with Carleton’s Institute of Political Economy, which thirstily attracts the intellectual left of this campus like the gravitational pull of a black hole sucking the very photons from its celestial sister.
Built on the conviction that critical social research ought to bring together activists, scholars, and students to be meaningful in the hostile political economic environment of contemporary Ottawa, the CSRC organized the first of five annual conferences in critical social research in 2009. As a pilot project aimed at testing the waters amongst the left-leaning Ottawa audiences, the first conference, entitled “Dialectics in Question: Revisiting ‘Capital’ &/in Crises,” was held at Carleton University. The gathering brought together activists, students, and professors across Carleton, as well as from the headquarters of Marxist academic research, York University.
But nay!
It was not enough to satiate the appetites of the hungry Ottawa masses, starved and deprived as they were, supping upon a cruel diet of Harper-esque platitudes! The people demanded more, and the CSRC grew. What was once a reading group hath now become a veritable organization, hosting seminars and workshops and assisting with critical film festivals across the polis!
Like the magicians of old, the CSRC resurrected the defunct journal, Alternate Routes, adding the subheading “a journal of critical social research.” As a founding CSRC member, Fanelli was made editor of the journal and published the first revived edition in 2011.
The CSRC’s mandate was a simple one: to be a graduate student-led research collective bringing together faculty, trade unionists, and community activists to promote, support, and create a platform for the sharing of critical perspectives and research conducted on the defining social issues of our time.
And oh, how they did!
Hosting seminars on feminist methodology, launching books such as The Ugly Canadian by Yves Engler and The AKP Years in Turkey by Simten Coşar, and allying themselves with the Ontario Public Research Interest Group (OPIRG), the CSRC had become a hub and sanctuary for those swimming against the currents of austerity, colonialism, and intellectual boredom. Scholars and students looked forward to the group’s annual conference, coming from Central and Western Canada, the northeast of the United States, the Middle East, and South Asia. To the delight of the masses, the CSRC’s fourth annual conference was held in 2012, entitled “Fault Lines of Revolution!”
With a membership continually growing, representing an increasing number of undergraduate students, the venerable CSRC became a Carleton University Students’ Association (CUSA) club – at least until the beginning of the end in 2012. Plagued by technocratic thugs who had commandeered the normally progressive undergraduate union, the CSRC was forced to spend a ridiculous amount of time haggling, fighting, and hoop-jumping to satisfy the ideologically driven new CUSA executive, arguing that, yes, even left-wing student groups deserve the same treatment as the gun club and the anti-abortionists they preferred to support. The CSRC joined with other working groups of OPIRG to defend the organization against the callous attack and attempted defunding of the PIRG, celebrating with the progressive left when undergraduate students voted to continue supporting OPIRG, with over 70 per cent in favour of keeping the progressive hub on campus. That year, the CSRC hosted its fifth and final annual conference, entitled “Eulogies for the Public: Capitalism, Warfare, and the Conservative Turn.”
While many new members have been attracted to the CSRC’s executive board over the years, and some old stalwarts remained active unto the end, its members are plagued by the torrential downpour of doctoral dissertation demands. It is perhaps fitting, then, that as they rounded out half a decade with a “Eulogy for the Public,” we offer this public eulogy in the left-wing space of thy sacred Leveller parchment! As this generation of the CSRC departs and the project lays dormant, cast thee no tear! For the foundations lie waiting for the next generation of graduate students to take up the torch and burn a fire bright enough to be worthy of remembrance!
Posted by CSRC at 9:54 AM
Labels: Hiatus

History of the Great Lakes Graduate Conference in Political Economy

Yesterday the CSRC hosted the Fifth Annual Conference in Critical Social Research in conjunction with the 2013 Great Lakes Graduate Conference in Political Economy. As part of our opening address we heard from Doctor Rianne Mahon about the history of the latter conference. It seems the 2013 conference was the 10th time Great Lakes has been put on. We post the following notes from Dr. Mahon about the history of this innovative scholarly forum for graduate students. See here for PDF version.

Opening Address to the 2013 Great Lakes Graduate Conference in Political Economy
By Rianne Mahon, May 2nd, 2013

It is a pleasure to welcome you to what I think is the 10th Great Lakes Graduate Student Political Economy Conference (GLPEC).

The idea for the conference came from a conversation with a former student and friend, Greg Albo nearly 20 years ago, inspired by a graduate conference in international political economy I’d participated in at York. Greg and I thought it would be a good idea to broaden this to include all critical political economy, not just IPE, and to make this a regular event. We hoped it would help to cultivate innovative, critical, inter-disciplinary approaches to Political Economy by providing graduate students – the future of political economy - with a great opportunity to showcase their research and to develop lasting networks with their colleagues from other universities who share similar interests.

There is of course a long tradition of within department and less often within university grad colloquia but we wanted to reach out to grad students beyond our two universities. Our choice of the ‘Great Lakes’ region reflects the discussions of the time, which focused attention on trans-border regional clusters. In the mainstream discourse, these clusters centred on networks guiding flows of capital and goods but we wanted to create a different, counter-hegeomonic set of links. To do this we initially looked to a partnership between Carleton, Cornell and York. The first conference was hosted by Carleton in 1996, the second by Cornell and the third by York. Since then Carleton has hosted it twice (2004 and 2010), Cornell in 2005, and York in 2008. In addition, Binghampton and U of T have each taken a turn to host the conference - which makes this the 10th Great Lakes Graduate Conference.

So with that brief backward glance, I welcome you to this 10th Great Lake Conference and know that your papers will generate lively discussion. Have a great time!
Posted by CSRC at 9:59 AM
Labels: 2013 Great Lakes Graduate Conference in Political Economy
Older Posts Home
Subscribe to: Posts (Atom)